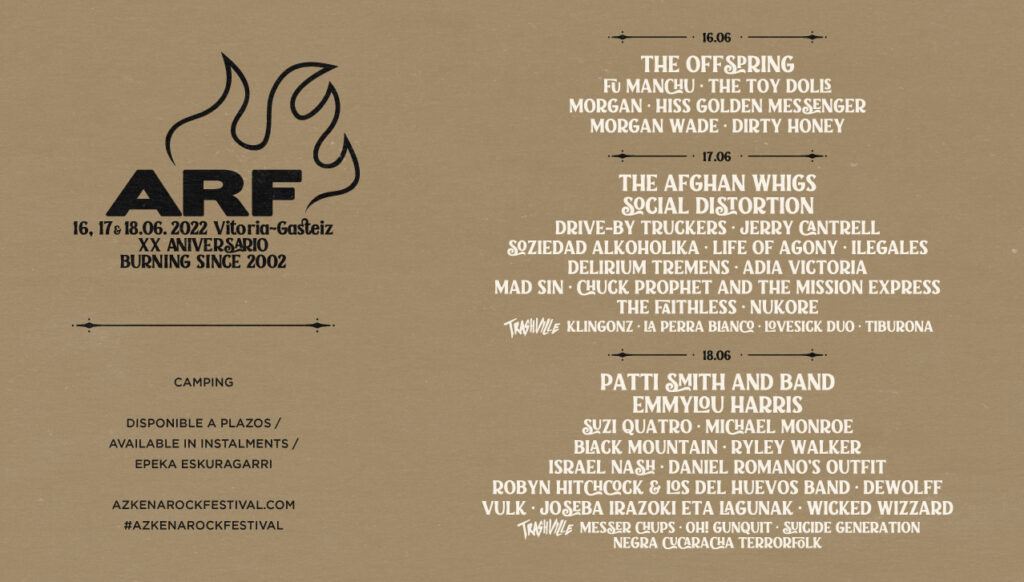 We will also reveal the lineup for each day. Thursday, an additional day to mark the anniversary, will feature The OffSpring, Fu Manchu and Morgan, among others.

Azkena Rock Festival is back with a bang to celebrate its 20-year anniversary by opening the stage for the biggest names of rock and roll and the world’s best audience. Today, we reveal the final names that complete the lineup of this long-awaited edition which, after two years off, will take place on the 16th, 17th and 18th of June in Mendizabala, Vitoria-Gasteiz. We’re also announcing the layout of the three-day schedule full of unmissable live performances. In addition to the long list of previously announced iconic names, including Patti Smith, The Offspring, Emmylou Harris, Social Distortion and Suzi Quatro, today we add The Afghan Whigs. They are giving one of their very few performances in our country to present their new album, which features Blind Melon guitarist Christopher Thorn, in their very special confirmation as artists for the festival, especially as the last time Gregg Dulli was in Mendizabala was with Mark Lanegan—his close friend and one of the greatest rock losses of recent times.

Jerry Cantrell, frontman and founder of Alice in Chains, joins ARF’s anniversary edition in a very special milestone as he will be performing live in Spain for the first time as a solo artist and with his first album in 20 years. Hiss Golden Messenger, one of the main references of American independent music, will also be joining the festival with his first concert in the country since his only visit in 2015 to present his new album. Michael Monroe, legendary singer of Hanoi Rocks, a band that was one of the biggest hits at ARF 2008, will return to Mendizabala to treat us to a new album and his legendary on-stage splits. Also well-loved around these parts, Israel Nash returns with a new album after a long hiatus from performing in Spain. The Toy Dolls will arrive in Gasteiz with the mission of repeating their memorable 2009 concert, where they revolutionised Mendizabala right when it was time to turn off the lights after an exhausting weekend.

A name that couldn’t be missed from this exceptional lineup of artists is Ryley Walker, one of the most innovative singer-songwriters on the scene who stands out for his original vocal melodies and a sound that shifts between rock, blues and psychedelia. Survivors of the alternative metal wave of the 90s, Life of Agony is an evergreen band led by Mina Caputo, one of the few transgender artists in metal. The kings of European psychobilly, Mad Sin, will be at Mendizabala to proudly honour their name.

Something that has always characterised Azkena Rock Festival is its ability to combine legendary names that have made rock history with new international names that will be the talk of the future. On this occasion the names that can’t be missed include: Adia Victoria, the songwriter and vocalist who is gaining a prominent spot on the American scene, supported by Jason Isbell and T-Bone Burnett; the young, promising talent Morgan Wade, who is compared to Dolly Parton and brings one of the most interesting voices in new country music; and Dirty Honey, who have been tipped as the successors to Guns N’ Roses and backed by Slash himself.

We are celebrating 20 years at the heart of rock and roll, and we couldn’t not share it with outstanding Spanish artists such as Soziedad Alkoholika, one of the most important bands in the history of Álava; the essential addition Morgan with The River and the Stone, an album rated as one of the best works of the past year by the specialised media; Ilegales, a legendary and savage band that is celebrating a 40-year career and therefore could not miss the event; and Delirium Tremens, a cult band based in the Basque Country with a short but intense career that is returning to the stage well-prepared after 30 years.

They were part of the announced lineup two years ago, and neither us nor them wanted to be left wanting, so we’ve confirmed Dewolff and Robyn Hitchcock & Los Del Huevos Band—two of the most celebrated names of our lost 2020 festival.

Euskadi can boast about having a high-level local scene that is made up of big names like Vulk, who have just released Vulk ez da, an album with which they’ve taken a new leap in their already meteoric career; Joseba Irazoki eta Lagunak is the personal project of one of the best

musicians this land has ever produced, guitarist for Nacho Vegas and fundamental member of the infamous Atom Rhumba, Joesba Irazoki comes to ARF with his own name and is joined in his performance by a selection of top musicians; and, finally, Nukore, a metal and hardcore band from Gasteiz joins the lineup.

Unfortunately, the ups and downs of the global pandemic will deprive us of the presence of L7, Reverend Horton Heat, The Marcus King Band and Shooter Jennings at this year’s festival edition.

Don’t worry, because there is no place for worry in Trashville, the wildest side of Azkena Rock Festival, which returns as the host of the most select acts of the rock and roll frenopathic. Headlining the bill is none other than Messer Chups, the most important horror surf band of the 21st century and a sample of everything that can happen at Trashville; Klingonz, the veteran British psychobilly band, a guaranteed hit; La Perra Blanco, the artist from La Línea de la Concepción, a gem at Trashville; Oh! Gunquit, an unclassifiable band that can only be defined as earth-shattering; Tiburona, the self-claimed ‘Sirens of the Manzanares,’ a one-of-a-kind group; Lovesick Duo, who bring the atmosphere of the American clubs of the 40s and 50s; Suicide Generation, guarenteed to bring speed, strength and chaotic concerts—one of those discoveries that only Azkena can offer and that will be talked about a lot in the future; and Negra Cucaracha Terrorfolk, the trio from Alava who create an apocalyptic atmosphere with their mix of American folk and the dirtiest, fastest horror punk.

Once again, we’d like to thank our loyal audience—a mix of those who still have their tickets from 2020 and those who are joining us now. Our crowd can now see that the moment to really let loose is finally approaching. It’s as simple as that. We are looking forward to experiencing the Azkena Rock Festival again in all its intensity. And this year with a third extra day as there is a lot to celebrate with the whole Azkena community following 20 editions of live rock and roll and the exciting reunion with the best audience on the planet in our longed-for Mendizabala.

Azkena Rock celebrates 20 years with the biggest names in rock